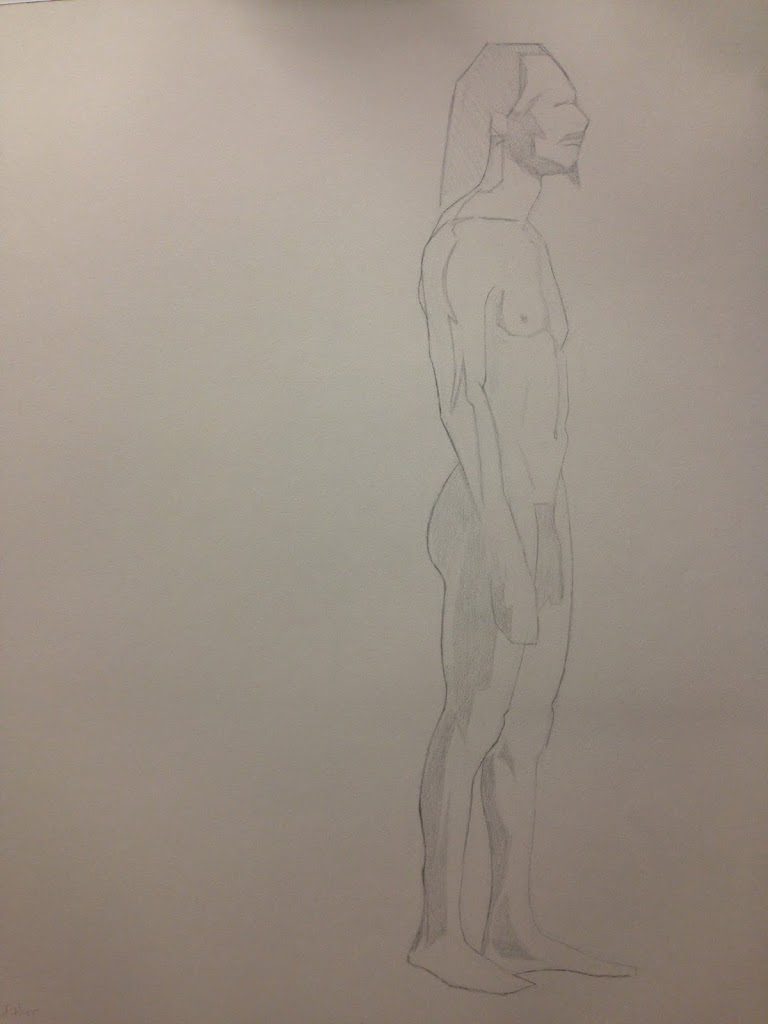 Done with week three of my first trimester at the Florence Academy of Art. We just finished up our first 2-week long pose in the model room. This means that for 3 hours a day, every day for 2 weeks, the model stands in the same pose and we draw that same pose on the same sheet of paper for those 2 weeks. The point is not to have a finished drawing in the end. It’s an exercise. It involved lots and lots of tweaking. Draw a line, check it, move it. Move the drawing forward, more checking and moving. Once a day, the teacher comes by and give an in-depth critique.

This week, I received a paradigm-shifting critique from Jordan, one of the teachers and the director of the school. He told me to focus on rhythm and gesture, that my figure looked stiff and dead. Now, this is not the first time someone has told me to, in essence, “loosen up.” I remember my high-school violin teacher telling me this over and over again, and I wanted to clock her.
I felt like clocking Jordan too, but I asked him a question instead. I said, “Jordan, I understand the concept you are telling me, but I do not understand what is means in terms of the marks I make.” And, Jordan told me something very interesting. He said that how we look determines what we notice. So, if I am doing a rough diagram of a figure and looking for major points to mark out the big shapes of the body, I am going to be moving my eyes from side to side on the figure and looking for general distances between unconnected points. However, if I am looking for the gesture of a line as it runs down the body, I am going to move my eyes down the line. So, if I want the gesture to be accurate, I have to look for gesture. The difference between a line made my connection accurately marked points and a line made by imitating a gesture can be very subtle, but it is also the difference between a living and a dead thing.
Indeed, Jordan pointed out that this sort of very small variation in elements of a drawing can make a very big difference in the final perception. This comment made me think of an experience I had in college when I sang with a polyphony choir. It was an intense choir. We each had private voice lessons – not so that we individually could be awesome singers, but so that we would sing correctly together. We practiced in sections and in full choir, and we went over the words of the songs so that we could pray them. And, the result was that when singing with this choir it was necessary to deliberately shut off my emotions because otherwise I would be a quivering puddle on the floor. It was powerful stuff, and when we sang for mass once a month, the church was packed.
I’ve sung in other choirs since, and they were all fine choirs, and none of them were nearly as obsessive about the quality of the music as my college polyphony choir. Both choirs sang (in many cases) the exact same songs, and both pretty much were on-key and sang the notes right. But, oh, one of them transported you into the realms of God and the other was mostly accompaniment. So, as an artist, one of the things I crave is that kind of perfection. That’s why I’m at a school like the Florence Academy. Not sure *what* exactly I’m going to make, but, man, it’s going to be good! 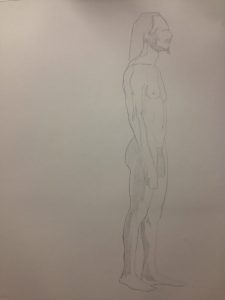 Part way through the figure drawing, trying to find the gesture.
Previous ArticleImaginary Animals
Next ArticleFantastic Paintings by Cornelia and Stephen