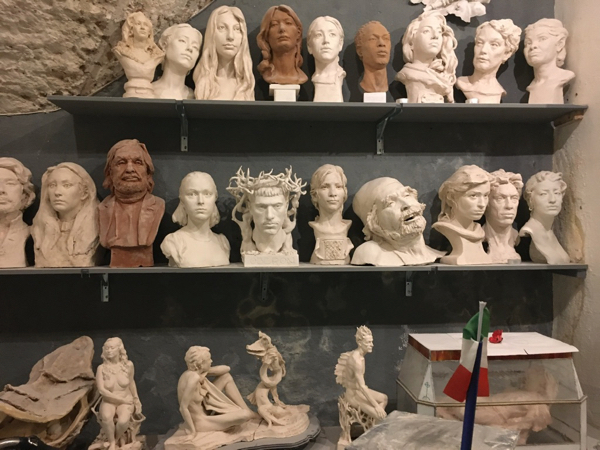 No pictures today. I left my phone at home. It was rather a mixed bless. Fewer distractions, but no pictures and no way to figure out why my bus was not where I thought it was going to be. For a moment, I was worried that I would be embarrassingly late to my first workshop with Jason Arkles at Studio della Statua. But, then I took a taxi.

TLDR: I made a fool of myself. I don’t know what I’m doing. Please leave a comment and tell me that I am capable of making something beautiful and meaningful in my lifetime.

Jason works in the sight-size method which basically means that the sculpture appears as the exact same size as the model when seen from the artist’s vantage point. When building up the form, the artist superimposes the sculpture on the model. Jason said that this makes the beginning stages really easy. I said that it felt like cheating. He said, “Well, what’s cheating about it? Why would you work in a more difficult way when you don’t have to.” I basically rambled on for several minutes and finally figured out my question. I asked him what an artist would do if he wanted to sculpt a figure from imagination or in a setup that wasn’t sight-size. Jason replied that learning to sculpt from imagination is a different process, and that there really aren’t situations where you can’t work in sight-size.

I still feel like I’m cheating. Why? I want to learn to sculpt the human figure. Jason says there are many stages to the process, and superimposing the statue on the model in the beginning is JUST the beginning. It’s just that I think the beginning is really important. I’d like to really have to observe the big proportions, not just copy them. My goal isn’t just to make a good looking statue. My goal is… my goal is… what is my goal? Am I just looking to be “accomplished,” to be able to say that I can make a nice realistic statue, so I’m a “real” sculptor? I’ve been saying that I want to learn human figure sculpture because the figure is a good didactic tool. Human beings are made to appreciate the beauties of the human form and to see those beauties repeated in the world around us. Also, “If you can sculpt the figure, you can sculpt anything.” But, do I really believe that? What’s more than that, do I really care? Am I just making up excuses for why it’s important for me to study because I enjoy studying and I enjoy making things with my hands? Do I even really need a reason?

I do need a reason, because tomorrow I want to be able to whole-heartedly participate in the workshop. I can’t do that if I’m constantly questioning the methods. I’m here to explore. Later there will be plenty of time for analyzing and decision making. So, maybe the question here is really this: Why does Jason sculpt the human figure? What is he trying to accomplish? Why are these the best methods to reach that goal?