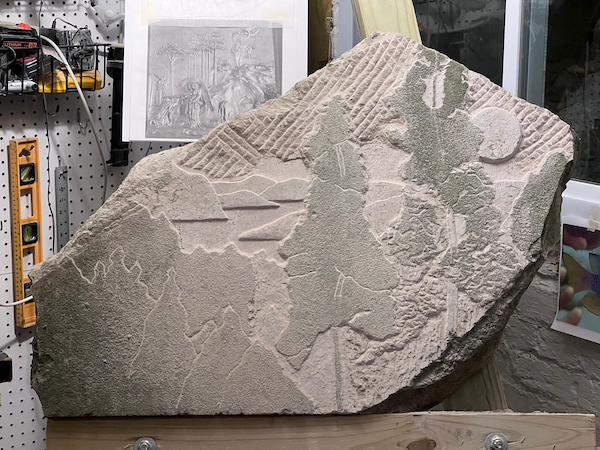 I spent the morning today working on my landscape carving project. It’s a carving in an existing slab of what I think is limestone. The commission is for neighbors of mine who have had this slab in their garden for at least the last decade. The story is that a stone-carver friend of theirs picked it up in Rock Creek Park, intending to eventually use it for a carving project. But, he moved away, and then passed away before he was able to come back and claim the rock. In the ten years the rock sat in the garden, moss grew on its surface, and the moss pattern resembled trees. So, the client commissioned me to carve this stone, partly in memory of their friend. And, they wanted me to work with the pattern suggested by the moss and carve a landscape with trees.

I tried drawing a landscape from an actual scene in Rock Creek Park, but Rock Creek is in a Valley, and the views it affords do not offer much depth. I wanted a foreground, middle ground, and background – a real, distant background. So, I sketched some trees from Pierce Mill in Rock Creek and inserted them into an imaginary landcape.

The client delivered the stone to my workshop and hoisted it – with the help of two strong men, onto my stone easel.

So far, I’ve gotten several carving sessions in, and it is developing slowly.

Creating the illusion of depth in a landscape carving involves the use of overlapping shapes, of different values created by shadow, and of contrasting textures. I start by making a line drawing of the large shapes – the different layers in the landscape. Then I carve each shape to a different depth. The objects closest to the viewer are left “high,” and the objects farthest away are carved out to be “low.” As the objects recede in the distance, the difference in the heights of the layers decreases as well, creating less contrast between the boundaries of the layers. The objects in the foreground are carved with more differences in height and therefore more contrast in the values that form the boundaries between the layers. Foreground objects also get more texture (are more bumpy) and therefore have more shadows on their surfaces, making them appear darker.

This process is basically like landscape painting, only I am using the way carving can create different values of shadows to make what is essentially a grey-scale painting. The same principles apply to the carving “painting” as to landscape painting. I am using what is referred to as atmospheric perspective – using decreasing contrast and decreasing detail as the picture plane recedes into the distance.