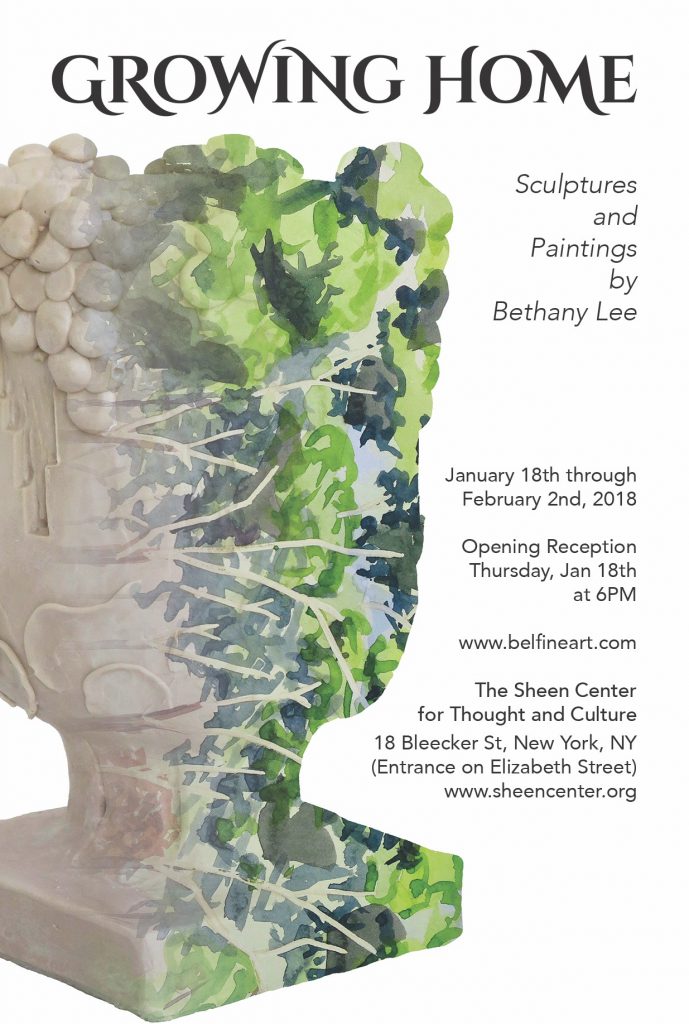 I just finished photographing the last sculpture for my Growing Home show of sculptures and watercolor cityscapes at the Sheen Center.  Here’s Climbing Tree II: 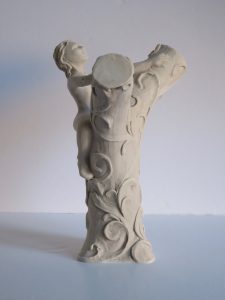 I also failed to post images of my other sculptures after City Planter, so here are Lion Head Relief, Lord of the Community Garden, and Swan Bucket:

So now, on January 1st of the new year, with the evening sun filtering through my north-facing windows, I have a few moments to reflect on the past six months of work that have gone into the show.

The work actually began quite awhile before then, and only 2-1/2 months of the six were intensively dedicated to the show. I’m also a student in my 2nd year at the Florence Academy of Art, and so that is where the bulk of my time and energy is currently spent. But before even applying to the Florence Academy, the Growing Home project took shape in my mind. It started with a notice about the Sheen Center’s Catholic Artist Residency that I read about in David Clayton’s Way of Beauty blog. At the time, I had been about half a year into an attempt to make art full-time. And, the way this expressed itself was in plein air painting and street peddling.

Yes, street peddling. I needed to come up with some art objects to make that were portable, quickly executable, and generally marketable. In New York City, it is legal to sell art (one’s own art) on the streets without a peddler’s license. Unfortunately, New York is a very expensive place to live. Enter the Sheen Center’s Catholic Artist Residency! Just at the time I was looking for some way to stay in the city without spending a fortune, I read about the residency. It’s designed specifically for artists whose careers would benefit from living in New York City. So, I applied. And then I waited.

And then went on with my life.

I was unsatisfied with the quality of my plein air landscapes, so I found a landscape painting instructional video on-line  which inspired me to attend weekly workshops, and those proved so helpful and inspirational that I decided to go back to school and really learn how to draw in the the western, figurative, representational tradition. – which is how I ended up at the Florence Academy.

Then, a couple of weeks before classes started at the Florence Academy, I heard back from the Sheen Center. They wanted to interview me! Which was great except that now I’m a full-time student. But, long story short, it turned out that the Sheen Center was willing to let me do the residency over my summer break. So, in mid-July of 2017, I moved into the Sheen Center for 2-1/2 months of plein air painting and sculpting.

Sculpting? Yes, I hadn’t mentioned sculpting, but I’m primarily a sculptor. My undergraduate degree was in sculpture, and I’ve done mold-making and casting on commission for several years. All this drawing and painting business is more or less a preliminary for making a 3-D creation. My proposal for the Sheen Center residency was to spend half my time doing plein air cityscapes and half my time making sculptural reflections on the paintings. The focus of the paintings would also be on natural beauty as it occurred in the city. I wanted to visually explore the relationship between God’s creation and man’s handiwork in the city.

July was hot. For that matter, so was August and September. The week before I arrived, the air conditioner at the communal workspace I signed up for – the wonderful Con Artist Collective – broke. I spent the summer sweating on the streets in front of my easel in the morning and sweating in the basement studio in the afternoon. I would get up in the morning, have a cup of coffee in my lovely room at the Sheen Center, take my suitcase full of plein air supplies out onto the streets of the East Village, and search for a spot to paint.

Sometimes, it would take an hour or more to find a spot. There are a number of things to prioritize: the view, suitability for selling, whether or not I’m blocking traffic, shade, subject matter, what visual themes I’m focusing on, shade – did I mention shade? Usually, I would finish one painting in a morning and then photograph it on the street. Then, I would go back to my room to clean up and post the image on the website where my patrons can buy prints of my work.

In the afternoon, I would go to my basement at the Con Artist and work on sculptures. The process went like this: brainstorm, sculpt, mold-making and casting. Brainstorming meant assembling my paintings from the last several days and then making a series of ten 5-minute little sculptures that were spontaneous, intuitive visual responses to the paintings. After finishing a set of these sculptures, I would take the one that attracted me the most and make that into a “real” model. For example, here is the sculpture sketch along with the finished model (in oil clay). 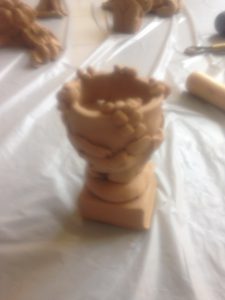 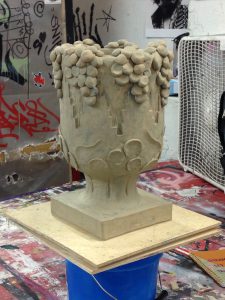 Then came the mold-making process. If anyone cares about that whole mess, here’s an instructional video from Smooth-on, the company from which I buy by materials.

By the end of the residency, I finished five sculptures. One of them was not acceptable to me, so I re-did it this fall, in the evenings after class and did the mold-making and casting over Christmas break.

Of, course, all of that (what I’ve written) is the “how” and not really the meat of what the residency meant. I mean, what about the central theme of God’s creation & man’s handiwork?

With respect to the theme, I found that the responses to my question of “What does God’s creation have to say to the city of man?” Were primarily visual. There were patterns and themes that appeared again and again and that had life in them – the juxtaposition of bricks and leaves, green and terra-cotta color; the ubiquitous blue of the sky, geometric shapes vs. organic shapes. In the sculptures, one of my inspirations was the architectural and other (apparently) salvaged sculptural objects at the Elizabeth Street Garden in Little Italy. In particular, I found myself returning again and again to the image of the lion again and again as an inhabitant of the garden. My sculpture for the show became in some senses the inhabitants of the visual world depicted in my plein air cityscapes. Each of the sculptures has a personality – the way that this camel sculpture in one of the local parks has a personality.

I think that I did expect a more philosophical answer to the question of “what does God’s creation have to say to the city of man.” I’m a thinker myself, and I like to ponder things in a systematic, verbal way. But, I approached this question *as an art project.* I asked a verbal question, but I pondered it by painting it and sculpting my reflections. If I had approached the question as a philosopher, I would probably have come up with a philosophical answer. But, I approached the question as an artist, and so I ended up with a visual response – not an answer, a response.

And, the response was color, it was shapes and texture. It was leaves and stones and bricks and water. It was sky and trees, fire escapes, clouds, tree trunks, the ubiquitous sky, silhouettes of people walking, green, brown, copper – everything in my paintings. It was the feel of wind on my face in the hot street, the heat of the sidewalk in the sun, the smell of people lying of the sidewalks, the oppressive closeness of people and the solitude of an urban cemetery, crowds and space, remoteness and closeness, the canyons of buildings and the unreachable sky.

In a word, I think that it was “wonder.” Which I knew already. But I didn’t know it this way. But that’s why we have art. Because to “know” a thing – the way I know that 2+2=4 only knowledge in a very limited sense of the word.

For all I experienced, the means to the experience and the product of them are the paintings and sculptures. I’d like to share them with you. Check out my Growing Home Show Catalogue here:

Previous ArticleTexture
Next ArticleWhat Goin’ On in the Kitchen