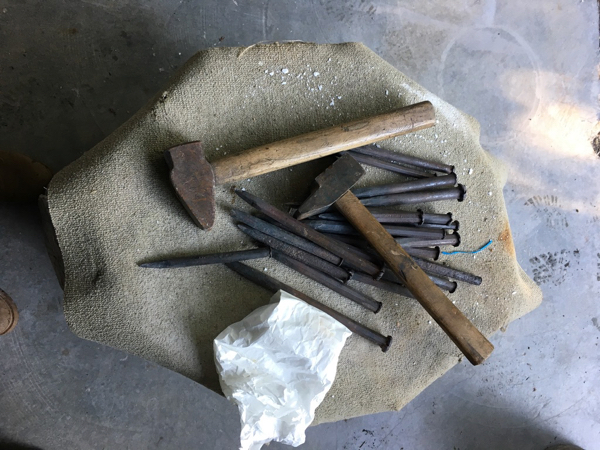 When I began this post, I was sitting outside at a bar/coffee shop in the Piazza of the village of Frassinoro. My lodgings are a 15 minute drive to the north and the carving studio a 15 minute drive to the south. This one stretch of road on the side of a mountain, overlooking the Valley of the Dragon has been my whole world for the past two weeks.

I’m apprenticing for Dario Tazzioli, a stone carver who grew up in this village. He apprenticed with a master stone carver from this region, then went to Carrara to the art institute there, then returned to this region to work. His studio is in a warehouse outside of town where he works in glorious solitude. Although, the truth is that he does get quite a few visitors, both social and business-related. But, in general, he works alone. When I sit in the porch of his building, where I spent most of the first week, working on a carving an exercise, I see nothing but trees, smell nothing but the mountains, hear nothing but the tap tap tap of Dario working inside the building and the occasional meow from the cats.

About a year ago, Dario started giving me online lessons. So, over Zoom, he taught me to square a block and to do a bit of lettering and relief carving. The exercise I worked on here in Frassinoro (ricciolo or “curly que”) is the next in the progression of his cirriculum. This carving was an improvement over my last ricciolo because the stems have more movement in them.

Right now, Dario has a number of projects in progress in his studio. There’s a portrait bust.

A large statue of St. Anselm for an Abbey

And, there are several large beams that Dario is carving for the renovation of a villa in Mantua

After doing my ricciolo exercise, the beams are the project on which I’ve spent most of my time. Honestly, I’m flattered and a little scared that Dario is giving me some actual work to work on. Several years ago, I took lessons from an old Greek woodcarver. So, providentially, I do remember a bit about wood carving.

The other project I’ve helped with has been the big St. Anselm. I’ve done a bit of pointing. That’s when you take a pointy tool and whack off as much stone as you can as quickly as you can. This is done, not at random, though. You either work by making parallel lines or, if working into a concave space, by making lines of single holes like a jackhammer.

Watching Dario, one would think that carving is simple and enjoyable. He works quickly, and the rhythm of the hammer is rapid and sure. Chips fly and the marble disappears under his hands. It *is* enjoyable. The way I think of it is that carving is an art form wherein you get to hit something something beautiful comes out. It’s satisfying and cathartic in the same way a drum circle is cathartic.

But, though it is, in a way, simple, it’s not easy. Maintaining focus on a repetitive task for long periods of time is in itself a skill. The are also the muscle memory skills necessary for efficient handling of the tools that comes only with lots and lots of repetition. For instance, when handling the point, there’s a particular hand motion that directs the force into the stone, another one that allows for a little rebound in the tool, plus the motion of the hammer, and all while keeping the grip relaxed. If the hands are tense, they tire more quickly and are more easily strained and injured. Yeah, so, the idea is to relax while breaking a rock with my hands. When I work at the same time as Dario, the rhythm of his strokes is double the speed of mine, and he’s also WAY WAY more efficient.

While we were working on the St. Anselm sculpture, I asked Dario why he finishes certain parts of the sculpture before he has started others. I thought, from talking to other sculptors, that the first step is to block in the whole sculpture and then to finish the last inch or two all over. In fact, one common practice is to create a small scale clay model, 3-D scan it, have it carved by robot (basically, a water jet 3-D printer, I think) to within a couple of inches of the final surface depth, and then the sculptor finishes it by hand.

Dario responded that it is difficult to block the sculpture in by hand correctly without finishing enough of it in order to get a visual sense of the finished piece. He showed me an unfinished block of marble out in the yard which he had jobbed out to a friend to block in using a grinder. The friend had miscalculated one of the points and removed too much material. The client had been in a rush and so Dario had tried to take this shortcut. “But,” he said, “you must respect the time of stone.”

Respect the time of stone. Stone is a slow medium. Dario continued explaining that when you work in this way, respecting the time of stone, finishing areas in order to perceive the statue, and also treating the model not as an unchangeable final form but as a guide, designing the statue as you go, then the statue is more alive. The final stone sculpture is the finished product and the object of meditation and decision. Then, he said, the sculpture has a soul. Sculptures that are reproduced mechanically from models seem cold and dead in comparison. A sculpture that is made, as Dario said, as though it is being raised from the water, is living. It has a soul.

Another image he used was the difference between listening to live vs. listening to recorded music or to a traditional piano vs. an electric piano.

Speaking of things that take time, carving doesn’t start with putting chisel to stone. It starts with forging the tools.

On my last day at the studio, I got to watch (and attempt a bit) the process of forging tools. We didn’t make anything from scratch, but there were a bunch of broken or deformed tools that Dario and his friend Daniele repaired by re-forging.

The basic process is this:

The tools are placed in the forge and heated.

When red hot, the tool is placed on the anvil and hammered into the desired shape.

Then the tool is returned to the forge to be reheated. When again red-hot, it is dipped into the tempering basin.

The idea of tempering is that steel, when heated, forms a crystalline structure. Cooling the steel quickly by dipping it in water preserves the crystalline structure. And, the hardness of the temper can be controlled by observing the color of the steel. After dipping the tool in water, the blacksmith removes it and observes the steel. The steel, when tempered, will have a gold tint at the tip and a blue tint closer to the body. Because the body of the tool is still hotter than the tip, the tip gradually becomes re-heated and as it does, the blue will advance toward the gold. If the blacksmith wants a harder too, he allows the blue to progress more. If a softer, he dips the tip back in the water while there is still a lot of gold, thereby halting the reheating (and hardening) process.

Previous ArticleStone Carving with Maestro Tazzioli
Next ArticleBack in the USA

2 Replies to “Respecting the Time of Stone”